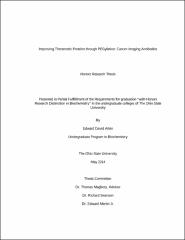 Radioimmunoguided surgery (RIGS) utilizes radionuclide-labeled antibodies that bind to an epitope specific to certain cancers to detect and image tumors. The Magliery lab has developed a good RIGS candidate molecule called 3E8.scFv, which possesses many good theranostic properties but clears from the blood too quickly. Studies on the covalent attachment of polyethylene glycol molecules (PEGs) to proteins indicate that such PEGylation could improve certain theranostic properties in addition to increasing the clearance time. Generally, however, the effects of PEGylation are poorly understood. My project is to study how PEGylation with different types of PEGs affects binding/activity, stability, size, and shape with the end-goal of improving 3E8.scFv as a RIGS molecule. I have studied PEG-conjugates of 3E8.scFv and 3E8cys.scFv (3E8.scFv with an added free cysteine) to characterize both the general behavior of PEGylated proteins and the differences between various types of PEGs. We can get a preliminary analysis of the effects of PEGylation with SDS polyacrylamide gel electrophoresis (PAGE), but for more in-depth characterizations, we will use: surface plasmon resonance (SPR) to measure binding; gel filtration chromatography to measure size and aggregation; differential static light-scattering (DSLS) and differential scanning fluorimetry (DSF) to measure stability; and analytical iii ultracentrifugation (AUC) and small-angle x-ray scattering (SAXS) to measure size/shape. Currently, we can non-specifically PEGylate 3E8.scFv via N-hydroxysuccinimide (NHS)-ester chemistry at lysines and specifically PEGylate 3E8cys.scFv via maleimide chemistry at the added free cysteine. Both processes are verified via SDS-PAGE analysis. We have assessed the binding and stability of 3E8.scFv, 3E8cys.scFv, and various PEG-conjugates of each using SPR and DSF, which indicate little loss in binding or stability from a single PEGylation at the cysteine in 3E8cys.scFv or from a low level of PEGylation of 3E8.scFv. With extensive characterization of PEGylation, we could explain how PEGylation improves theranostic effectiveness and better utilize it to improve theranostic proteins like 3E8.scFv.