The effects of DLL3 in axial skeletal development and glioma 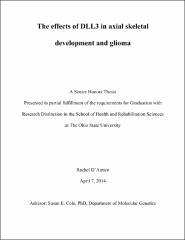 The Notch pathway is critical for normal development of the skeleton and nervous system. Dysregulation of Notch can also promote glioma, cancer of the glial cells. Tight regulation of Notch is achieved by modulating pathway activity through inhibitory ligands (like DLL3) and/or glycosyltransferases that affect receptor-ligand interactions (like Lunatic Fringe). In most contexts, increased Lfng causes an increase in Notch activity, while Dll3 expression causes a decrease in Notch activity. Our project looked at this modulation in two systems: axial skeletal development and glioma cells. In the presomitic mesoderm (PSM), loss of Lfng increases Notch activity while a loss of Dll3 causes a decrease in Notch activity. Examination of skeletal phenotypes and Notch activation patterns in double knockout mice shows that the Dll3-null phenotype is epistatic to the Lfng-null phenotype in the posterior PSM, suggesting that in a molecular clock-dependent setting, LFNG acts through DLL3 to inhibit Notch activation. However, in the anterior PSM, LFNG and DLL3 work through different pathways to regulate Notch. In contrast, in glioma Notch signaling maintains glioma stem cells, which worsen outcomes. Increased Dll3 expression in glioma tumors leads to better prognosis, suggesting DLL3 may inhibit Notch activity. To study this hypothesis, we used Luciferase assays in glioma cells stably transfected with a luciferase gene under the control of a Notch-dependent promoter, as well as MTS viability assays. We found that increasing Dll3 expression decreases Notch signaling, but does not affect cell viability (a Notch-independent phenotype). DLL3 appears to be a promising inhibitor of Notch activity in glioma cells, suggesting it could be targeted in future treatment options. We have found that regulation of Notch is highly context dependent, both in development and disease.