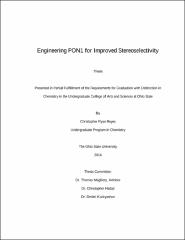 Organophosphorus nerve agents are harmful chemical substances that inhibit acetylcholinesterase activity. This impedes hydrolysis of the neurotransmitter acetylcholine at synapses in the brain and at neuromuscular junctions. Because of this, muscles in the body do not get the appropriate signal for muscle contraction. This leads to a number of side effects, including eventual death by asphyxiation. These chemical weapons have been used throughout modern history, including the use of Sarin in the 1995 subway terrorist attack in Tokyo by the Aum Shinrikyo religious group and more recently in Syria by rebel terrorist groups. These agents have been designed based on insecticides, specifically organophosphorus agents, because of their extreme toxicity toward higher vertebrae organisms. Civilians in many third world countries are fatally poisoned due to the toxicity of these insecticides. To provide protection against these insecticides and even organophosphorus nerve agents, Paraoxonase-1 (PON1) has been observed to have some catalytic efficiency for the agents. This esterase is found in serum at concentrations close to 50 µg/L, and has low activity to hydrolyze the more toxic isomer of these OP agents. Through directed evolution and protein engineering, a mutant of PON1 could be designed to have a high enough catalytic efficiency to hydrolyze the toxic isomer of these agents and eventually be administered to humans for protection. Paraoxonase-1 is a 42 kDa calcium dependent esterase. It exhibits a six-bladed propeller tertiary structure with two calcium sites. In serum, PON1 is synthesized in the liver and circulates within HDL (high density lipoproteins) particles. Because it binds to HDL, it is suggested that PON1 may play an important role in atherosclerosis prevention and reverse cholesterol transport. PON1 primarily acts as a lactonase in vivo, but has some activity for organophosphorus agents. Because of this, it is a novel candidate as a catalytic bioscavenger. Using directed evolution via gene shuffling of rabbit, human, mouse, and rat PON1 genes, the Weizmann Institute expressed chimeric recombinant PON1 enzyme (G3C9) in high yield in bacteria to use as a model for studying PON1 activity. This wildtype, G3C9, has a modest amount of activity towards these OPs and nerve agents. The organophosphorus agents such as GB, GD, VX, and VR all have stereoisomers and are synthesized as racemic mixture. Interestingly, the SP-isomer of all these compounds is more toxic. G3C9 has little to no activity for the SP-isomer of these molecules. However, through a number of rounds of directed evolution a mutant called I-1-F11 has been found to have a higher affinity for the SP-isomer rather than the less toxic RP-isomer, hydrolyzing the SP-CMP-Coumarin analogue of CMP at a rate of 12.1 µM-1m-1. Because of this, I-1-F11 can be used as a model to improve the stereoselectivity of PON-1, which could eventually lead to an enzyme with close to diffusion limited activity towards the more toxic isomer of OP agents and insecticides. I-1-F11 differs by seven different residues from the wildtype, G3C9. These mutations include L55M, L69V, H115A, H134R, F222M, I291L, and T332S. By using site-directed mutagenesis of PON-1, the importance of these residues for stereoselectivity can be determined and other mutations significant for stereoselectivity can be identified. From our studies, all seven mutations appear to play a significant role in the stereoselectivity of 1-I-F11, especially L55M and L69V which have the most effect.