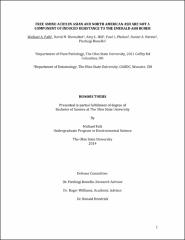 The emerald ash borer (EAB, Agrilus planipennis) is an invasive wood-boring insect responsible for the death of millions of North American ash trees (Fraxinus spp.). While native ash species are susceptible to the pest, Manchurian ash (Fraxinus mandshurica), which shares a co-evolutionary history with the EAB in Asia, is resistant. A 2012 study by Hill et al. investigated constitutive (pre-attack) nutritional components of ash phloem, the feeding substrate of EAB, and their relationship to resistance against the insect. No work, however, has looked into induced (post-attack) nutritional components. The main objective of this study was to test the hypothesis that EAB attack would induce decreases in free amino acid concentrations of resistant Manchurian ash compared to susceptible green and white ash. A fertilization treatment was implemented to elucidate interspecific differences in resource utilization. A secondary objective of this project was to investigate potential associations between free amino acid concentrations and host species-specific larval feeding efficiency patterns observed in a separate experiment (Showalter unpublished), hypothesizing that free amino acid concentrations and larval feeding efficiency would share a direct relationship. Free amino acid concentrations decreased in response to attack but did not vary significantly between species and failed to explain species-specific larval feeding patterns. Findings thus suggest that free amino acids do not play a significant role in induced ash defense against EAB.