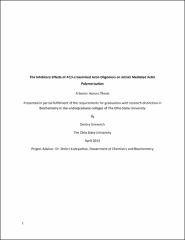 The actin crosslinking domain (ACD) is an actin-specific toxin produced as a part of larger toxins by pathogenic Gram-negative bacteria Vibrio cholerae, Vibrio vulnificus, and Aeromonas hydrophila. When the toxin is delivered to the cell, ACD catalyzes the crosslinking of actin monomers into non-polymerizable actin oligomers of varying size. The current view is that the crosslinked oligomers have a passive role in damaging the cytoskeleton, i.e. that ACD activity disrupts the actin cytoskeleton due to a gradual accumulation of non-functional actin oligomers which leads to depletion of both the monomeric and filamentous actin pools. Due to the effectiveness of the toxin at low cellular concentrations, it is possible that the oligomers have a more active role in the disruption of the cytoskeleton. Actin oligomers exhibit a unique combination of properties, different from G- and F-actin, giving them the ability to interact with G-actin binding proteins while possessing tandem binding sites. We hypothesized that ACD-crosslinked oligomers should have a higher affinity for tandem actin-profilin binding proteins. Specifically, the ability of the formin homology 1 (FH1) domain of formins to bind profilin-actin complexes could be interrupted by these crosslinked actin oligomers. We tested this hypothesis by exploring the interactions of these actin oligomers with the mouse formin mDia1. The method used in order to study protein activity is pyrene-labeled actin polymerization assay. We found that nanomolar concentrations of actin oligomers, when preincubated with profilin, inhibited mDia1-mediated polymerization in a concentration dependent manner. This project elucidates a novel, unexplored toxicity mechanism implemented by ACD to affect actin dynamics, leading ultimately to cell rounding and cell death. Characterization of this inhibition highlights the striking efficiency of bacterial toxins and the ways in which they can hijack cellular machinery to accomplish their goals.