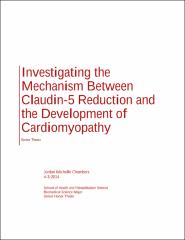 Heart disease is the number one cause of death in the United States. Despite the prevalence of heart failure in the population, little is known about its molecular mechanism of heart failure. The tight junction protein claudin-5 has recently become of interest to my lab and others in heart failure. Claudin-5 has been shown to localize to the lateral membrane of cardiomyocytes and claudin-5 is reduced in the hearts of the dko (dystrophin/utrophin knockout) mouse model of Duchenne Muscular Dystrophy, which exhibits the clinical signs of cardiomyopathy. Claudin-5 has also been shown to be reduced in at least 60% of human end-stage heart failure. When claudin-5 levels were maintained in the hearts of dko mice, much of the cardiomyopathy was prevented. These findings indicate that claudin-5 is a potential therapeutic target for the treatment of cardiomyopathy and heart failure. To determine the mechanism between claudin-5 reduction and the development of cardiomyopathy, my lab developed an inducible cardiomyocyte-specific claudin-5 knockdown mouse model, where claudin-5’s lone exon was excised using a Cre recombinase, which was activated by tamoxifen injection. At 14 weeks of age experimental mice and cre transgenic control mice exhibited reduced ejection fraction, indicating that a cre-dependent toxicity was occurring. To alleviate this issue, the mice were switched to tamoxifen citrate chow, which has been shown to cause less toxicity. At 14 weeks of age, experimental mice had an average ejection fraction of 57% while cre transgenic control mice had an average ejection fraction of 59%, which supports that the tamoxifen chow prevented the development of a Cre-dependent toxicity. The experimental mice have developed abnormal patterns in the basal lamina and they have developed areas of fibrosis in the extracellular matrix. Staining of an endothelial cell marker, CD31, shows that experimental mice have developed abnormal wavy patterns of the endothelial cells. These findings indicate that claudin-5 is involved in the mechanical attachment of the cardiomyocytes to the extracellular matrix or to endothelial cells, since claudin-5 is also present in endothelial cells. This mouse model indicates that claudin-5 has a significant connection to the development of cardiomyopathy, which can be further explored using this model. Advisor: Jill Rafael-Fortney