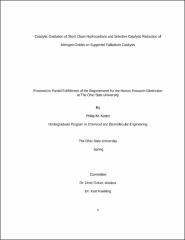 Lean burn engine exhausts contain several undesirable chemical species that are often released into the environment. These pollutants include considerable amounts of nitrogen oxides (NOx), unburnt hydrocarbons, and carbon monoxide. These species are known precursors to acid rain, smog and ground level ozone formation. In order to comply with stringent environmental regulations, a selective catalytic reduction (SCR) system is designed to reduce these emissions under lean conditions. Industrial engines typically operate in these oxygen-rich conditions to combust as much of the fuel as possible, which minimizes pollution by hydrocarbons. This dual catalyst bed promotes the oxidation of NO to NO2 and the subsequent reduction of NO2 with hydrocarbons to diatomic nitrogen, water, and carbon dioxide. Past research of Dr. Ozkan’s research group at The Ohio State University has been focused on using palladium on sulfated zirconia (Pd/SZ) as the reduction catalyst and cobalt oxide on ceria (CoOx/CeO2) as the oxidation catalyst [1]. This study is interested in the use of the palladium catalyst to reduce nitrogen oxides in the presence of short chain hydrocarbons that are not burned in the combustion process of the engine, namely methane and propane. This is done by passing a known feed designed to simulate the products of combustion through a packed bed of this catalyst. Since this reaction is known to be inhibited by the presence of water, trials with and without water are performed for comparison. Supports of interest to this study include sulfated zirconia, which has been used previously, as well as a new material known as osorb (Oz). This material has several novel characteristics that make it a desirable support for this reaction. Most notably, osorb is a highly hydrophobic material [2]. It is expected to reject water from accessing the active sites, thus reducing the impact that water has on the activation of these light alkanes. These catalysts are also tested for their ability to reduce NO2 while using the alkanes as reducing agents. Both catalysts of interest were shown to have the ability to reduce NO2 with both methane and propane. As expected, conversions of methane were lower than that of propane due to the lack of a carbon-carbon bond. Water was shown to have an effect on the conversion of methane on both catalysts, as well as on the conversion of propane on the Pd/SZ catalyst. The Pd/Oz support showed no difference in conversion of propane. However, conversions seen on the Pd/SZ catalyst were generally greater than those seen on the Pd/Oz catalyst. Additional synthesis and experimentation may be required on this new support to best tailor its qualities for this reaction.