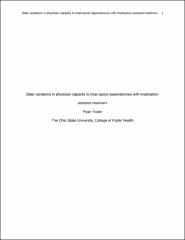 Background: The opioid epidemic is a current public health crisis that affects millions of Americans. According to the Centers for Disease Control and Prevention (CDC), deaths due to opioid overdoses have increased at a rate that has lowered the national life expectancy for the first time in decades. Access to opioid treatment for people with opioid dependencies allows people an opportunity to seek recovery for their addiction. Medication-assisted treatment (MAT) is becoming an effective method of care; combining behavioral therapy and medication. The federal government permits clinicians that are not apart of opioid treatment programs to apply for waivers that allow them to individually prescribe MAT drugs. Thus, physician capacity—the proportion of physicians available to prescribe MATs—affects access to this type of care. However, physician capacity to prescribe MATs are rarely touched upon in the literature, even though it is a large factor in increasing access to care. Method: The purpose of this study is to examine the association between physician capacity to prescribe MATs and related policy and public programs. This is a retrospective observational study that examines physician capacity trends from 2007 to 2016. Using data from the Substance Abuse and Mental Health Services, the number of opioid treatment programs and physicians with specific waivers to prescribe MATs were counted and standardized by population. The State Drug Utilization data from the Centers for Medicare & Medicaid Services, age-adjusted opioid overdose death rates from the Centers for Disease Control and Prevention, and other variables studied were also examined by state and by year. Treatment capacity and mortality variables were divided into quartiles by year. Results: High capacity states had more growth in buprenorphine waivers between 2007 and 2016. High capacity states were also more likely to have expanded their Medicaid programs. States with low physician capacity to treat with MAT were less likely to have expanded their Medicaid programs and had the lowest proportion of state level substance use risk assessments policies as a requirement or recommendation to physicians before prescribing pain medication. Conclusion: Understanding the commonalities of high capacity states may offer an insight to possible policy interventions to confront the opioid epidemic. Furthermore, research that blends the worlds of public policy and public health are important for combatting this multifaceted problem.