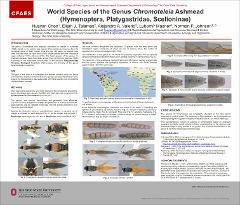 The genus Chromoteleia was originally described by William H. Ashmead (1893), based on the colorful type species Chromoteleia semicyanea from the Caribbean island of Saint Vincent. Currently, six species have been recorded from the New World and a single species from Africa. One fossil species, C. theobaldi Maneval, was reported from Baltic amber (from 40~60 mya), but the status of this species is not clear. These creatures are parasites of insect eggs, but which host they attack is still unclear. Since its original description Chromoteleia has never been comprehensively reviewed. In this study, a total of 27 species are recognized worldwide, of which 21 are new to science. All species are described and illustrated. Several important morphological characters are provided for the identification of the species of Chromoteleia and the geographical distribution records of the genus are expanded to 29 countries in Central and South America, the Caribbean, and Africa. The documentation of the species diversity is crucial to the understanding of the evolution and interrelationships in this genus, as well as informing conservation policies.