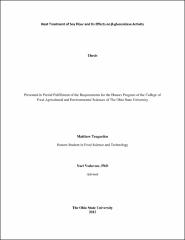 Isoflavones, phytochemicals readily found in soy beans and soy products, have been associated with reduced risk of prostate cancer in mice. Such findings require translation to human prostate cancer patients and thus methods for delivering the isoflavones to the body. Previous work in our laboratory has focused on soy-almond bread. The majority of isoflavones in soy are not in a form easily absorbed by the body. However, isoflavones are converted to a bioactive form by β-glucosidase, an enzyme intrinsic to soy and almond. Previous studies in our lab have suggested that the extent of this conversion may be affected by the heat treatment of soy ingredients. In order to elucidate the role of heat treatment in increasing β-glucosidase activity, crude enzyme extracts from raw almonds and raw or heat treated soy flour-soy milk mixture were obtained using a sodium phosphate buffer at pH 5.0. The heat treatment consisted of roasting or steaming. Protein content was quantified using the Bradford and bicinchoninic acid methods, which indicated that almond and raw soy mixture contained the most protein, while the steamed contained the least. When the β-glucosidase activity of the extracts was measured using p-nitrophenol-β-D-glucopyranoside, almond extract showed the greatest activity, but interestingly, roasted and steamed extracts showed the next highest activity, followed by fermented and raw. It appears that water plays a key role in the mechanism of conversion of isoflavones into bioactive forms, while protein content is less relevant. Such finding is critical when tailoring foods to contain high levels of phytochemicals that are potentially more bioactive by either modifying the crops that provide the raw ingredients or the processing that leads to the desired outcome.