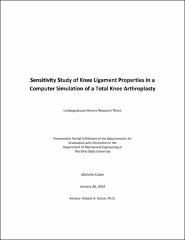 Total knee arthroplasty (TKA) is a common, end-of-stage surgical treatment for osteoarthritis. It is widely believed that surgical technique has a large influence on patient function after TKA. Computer simulation of TKA is a valuable tool for establishing an objective connection between surgical technique and postoperative function. However, there is little consensus on how to accurately model ligaments surrounding the knee and a lack of understanding of how modeling choices influence simulated TKA kinematics. The purpose of this study was to systematically investigate the sensitivity of variations in ligament modeling parameters on simulated TKA kinematics. 850 simulations with the knee in full extension were run with the following modeling variations of the medial and lateral collateral ligaments (MCL and LCL): increasing and decreasing slack length by 2.5 and 5%, increasing and decreasing stiffness by 25, 50, and 75%, varying attachment sites of the ligaments by translating 1 cm in the two anatomical directions and crossing ligament fibers, and increasing the number of fibers from two to four. An applied force versus varus/valgus angle curve was calculated from the output of each simulation. The specimen-specific simulation of TKA motion showed clear differences in the varus/valgus behavior of the knee with varying ligament modeling choices. These results suggest that ligament slack length has the greatest impact on varus/valgus laxity. Increasing the number fibers of the MCL affected the varus/valgus laxity and indicated sensitivity to the anterior/posterior location of the additional fibers. Understanding the sensitivity of ligament modeling choices informs the creation of computer simulations of TKA motions that can provide reliable insight of how surgical technique influences knee function after TKA.