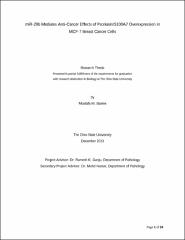 Breast cancer is the second leading cause of cancer mortality in women in which one in five women will develop the disease in their lifetime. Poor prognosis is associated with invasive and metastatic breast cancer. S100A7/Psoriasin gene is overexpressed in a wide range of epithelial malignancies, specifically ERα- breast cancer. MicroRNAs (miRNA) are short nucleotide sequences that modulate gene expression through partial complementary binding to 3’ untranslated region (UTR) region of messenger RNA post-transcriptionally to either repress translation or degrade RNA. Dysregulation of miRNA expression is associated with cancer progression. miR-29b is a potent miRNA which has been shown to exert tumor suppressive properties. We have observed upregulation of miR-29b expression in S100A7-overexpressing MCF-7 breast cancer cells. The goal of my project is to understand how overexpressed miR-29b in S100A7-overexpressing MCF-7 cells affects proliferation and metastasis. We created hS100A7 overexpressing MCF-7 cells by stably transfecting S100A7-containing vector. We observed significantly reduced cell proliferation in the overexpressing cells compared to vector control. Real-time PCR (qPCR) showed increased levels of miR-29b expression in S100A7-overexpressing cells compared with vector control cells. This is in accordance with our observation that NF-kB activation and nuclear translocation is inhibited by S100A7 overexpression, given that NF-kB is a negative regulator of miR-29b transcription. Furthermore, Western blot analysis indicated S100A7 overexpression increased p53 protein level, which could be at least in part due to miR-29b upregulation. Thus, we verified the anti-proliferative effects of S100A7 upregulation in MCF-7 breast cancer cells is mediated through increased levels of miR-29b. Because malignant cells depend on dysregulated expression of miRNA genes, miR-29b can be further investigated as an effective miRNA-based therapy for cancer patients. In conclusion, here we report that miR-29b is a potent miRNA that has been shown to exert tumor suppressive properties in ER+ breast cancer cells. S100A7-overexpressing cells presented anti-proliferative phenotype when compared with the vector via modulating key proteins important in cell-cycle regulation and cell metabolism. Our current model suggests that S100A7 overexpressing negatively regulates NF-κB which in turn results in increase in miR-29b levels and subsequently anti-cancer properties.