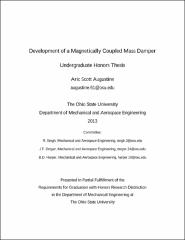 Tuned mass dampers can be found in a variety of rotating systems, such as automotive drivelines and motors in kitchen appliances. Such devices can suffer from low durability due to a large number of operating cycles, large displacements, and the limitations of their elastic and dissipative elements. A simplified driveline experiment is designed and used to investigate the effect of a magnetically coupled mass damper concept. The behavior of this system is examined in the time domain under a free vibration response. The addition of the magnetically coupled mass damper reduces the duration and amplitude of the vibration response of the primary system. Linear and nonlinear dynamic models are developed to explain observed coupling mechanisms (such as effective stiffness and damping elements, interfacial friction, spatial variation in magnetic loading, and drag within the bearings). A linear model is used to investigate physically tractable tuning concepts with linear parameters that are identified from measurements. The models suggest that a tuned concept could yield up to a 5 dB insertion loss in the motion of a primary system, with a slight reduction in the resonance frequency. Further work is needed to fully explore the underlying behavior.