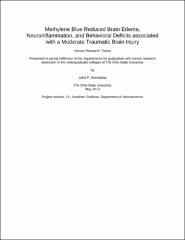 Treatment for traumatic brain injury (TBI) is aimed at mitigating the inflammatory response and subsequent complications present immediately after injury as well as the chronic behavioral complications that can persist months or years following the initial injury. Currently, there are no effective treatments to prevent the acute and prolonged neuroinflammation and behavioral deficits after a TBI. Methylene blue (MB) is an anti-inflammatory agent and inducible nitric oxide synthase (iNOS) inhibitor used clinically to reduce inflammation associated with septic shock and hypoperfusion. The purpose of this study was to determine the extent to which MB reduced inflammation and behavioral deficits associated with TBI. Adult (2-3 mo) mice received a sham injury or moderate and diffuse TBI using a midline fluid percussion injury model. Between 5 and 15 min after injury, mice were injected intravenously with sterile water or MB. Mice were either sacrificed 24 h later for tissue collection or examined for anxiety, motor coordination, and depressive-like behavior at one week after injury. Here we show that a moderate TBI increased brain edema in mice 24 h after injury, but was reduced by MB. In addition, 24 h after TBI mRNA expression of several neuroinflammatory mediators including IL-1β and CD14 were increased, but these were also reduced with MB treatment. Moreover, MB decreased the inflammatory profile of trafficking macrophages associated with the brain after injury. Behaviorally, mice with a TBI had impaired motor coordination up to one week after injury and showed evidence of depressive-like behavior at the one week time-point. Treatment with MB, however, improved motor coordination up to baseline and reduced TBI-associated depressive-like behavior. Taken together, these data indicate that MB may serve as an effective clinical treatment to reduce immediate neuroinflammatory events and abrogate chronic behavioral complications associated with TBI.