Pressure of Partial Crystallization of Katla Magmas: Implications for Magma Chamber Depth and for the Magma Plumbing System 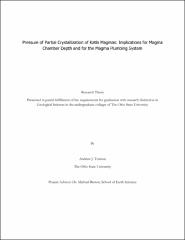 Iceland is home to some of the most active volcanoes in the world, and recent eruptions emphasize the need for additional studies to better understand the volcanism and tectonics in this region. Historical patterns of eruptive activity and an increase in seismic activity suggest that Katla is showing signs of an impending eruption. The last major eruption in 1918 caused massive flooding and deposited enough sediment to extend part of Iceland’s southern shoreline by 5 km. It also generated sufficient ash over many weeks to cause a brief drop in global temperature. A future eruption similar to the 1918 event could have serious global consequences, including severe disruptions in air travel, short-term global cooling, and shortened growing seasons. Relatively few studies have focused on establishing the depth of the main magma chamber beneath Katla, although knowledge of magma chamber depth is essential for constraining models for magma evolution and for understanding the eruption dynamics of this volcano. The results of seismic and geodetic studies suggest the presence of a shallow magma body at a depth of 2-4 km, but do not provide firm evidence for the presence of deeper chambers in contrast to results obtained for other volcanoes in Iceland. Studies of volcanic ash layers reveal a history of alternating cycles of basaltic and silicic eruptions. I suggest that the shallow magma chamber is primarily the source of silica-rich magma, and postulate that there must be one or more additional chambers in the middle or deep crust that serve as the storage site of the basaltic magma erupted as lava and ash. I have tested this proposal by calculating the pressures of partial crystallization for basalts erupted at Katla using petrological methods. These pressures can be converted to depths and the results provide insight into the likely configuration of the magma plumbing system. Published analyses of volcanic glasses (lava, ash and hyaloclastite) were used as input data. The raw data were filtered to remove non basalts and to exclude basalt samples with anomalous chemical compositions. Pressures of partial crystallization were calculated by quantitatively comparing the compositions of the glasses with those of experimental liquids in equilibrium with olivine, plagioclase, and augite at different pressures and temperatures using the approach described by Yang and co-workers (1996). The results for samples that yielded pressures associated with unrealistically large uncertainties were filtered out of the database. Pressures for the remaining samples were converted to depths assuming an average crustal density of 2900 kg/m3. The results indicate that most magmas partially crystallized over a range of pressures corresponding to a range of depths from 20 to 25 km. I conclude that one or more magma chambers occur in this depth range, or at slightly shallower depths if the effects of water on calculated pressures of partial crystallization are taken into account. Most erupted basalts have ascended from this depth directly to the surface, presumably via dikes. The Katla plumbing system is thus similar to that at other major volcanoes (Hekla, Bardarbunga, Grímsvötn) in the eastern volcanic zone inasmuch as the majority of the erupted magmas are supplied from chambers in the middle and lower crust at depths of 10 to 30 km.