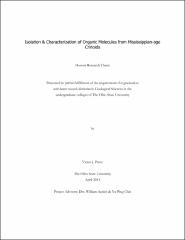 In examples of exceptional preservation, fossil crinoids (phylum Echinodermata) from the same locality display species-specific color preservation. These colors are produced by light absorbing chromophores in organic molecules and have been recognized as polyaromatic hydrocarbons. Ultraviolet visible (UV-Vis) light spectroscopy and Orbitrap electrospray ionization mass spectrometry (ESI-MS) were used in this study to further elucidate the identity of these organic molecules, while also assessing the feasibility of utilizing these molecules as biomarkers to track phylogeny. Organic molecules extracted from fossil material were compared to extracts from modern echinoderm analogues in order to determine the most plausible identities. Results indicated that the organic molecules preserved in Paleozoic crinoids are distinct from those identified in Mesozoic crinoids. These differences may be attributed to biological differences between the different crinoid taxa, but most likely are associated with the different geologic settings that the crinoids were deposited in.