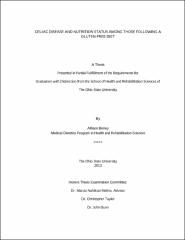 The prevalence of celiac disease is increasing and the popularity of the gluten-free diet—the only current medical treatment for celiac disease—is also increasing. However, the number of individuals following a gluten-free diet (GFD) is highly disproportionate to the number of individuals with diagnosed celiac disease. This raises the questions: who is following the GFD and what are the reasons for following the diet outside of a diagnosis of celiac disease? Previous research has demonstrated that the GFD lacks essential nutrients such as fiber, iron, B vitamins and folate, so there is concern that following a GFD without celiac disease may not only be unnecessary, but may also be have more risks than benefits. This study aimed to describe the population following a GFD, demographically and nutritionally. Using data from the 1999-2004 and 2009-2010 NHANES surveys, conducted by the Center for Disease Control and Prevention (CDC), demographic data, medical history questionnaires and serological test results were collected for 157 individuals who were following a GFD, who had ever been told they had celiac disease and who had either a single or double positive serological test for the celiac antibodies tTG and EMA. The descriptive analyses of this population revealed that Non-Hispanic white women (average age of 49 years) are the most likely followers of the GFD. Also, of those following a GFD, >90% were doing so without ever being told they had celiac disease. Nutritionally, those following a GFD consumed a higher average amount of fiber, iron, folate and riboflavin than those not following the diet. However, the percentage meeting the EAR/AI thresholds for these specific nutrients is lower for those following a GFD than for those who are not. Further research on the adequacy of the GFD is needed as the gluten-free product market continues to evolve.