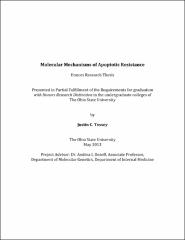 Lung cancers are the most common cancers in America, 85% of which are classified as Non-Small Cell Lung Carcinomas (NSCLC). NSCLC are most often diagnosed in the advanced stage, when treatment options are limited and ineffective due to the resistance of the cancer cells to undergo apoptosis. The tumor necrosis factor-related apoptosis-inducing ligand (TRAIL) has been shown to selectively induce apoptosis in tumor cells while leaving normal cells unaffected. TRAIL-induced apoptosis involves activation of caspase-3, an essential cysteine protease in the regulation of apoptosis. Caspase-3 activation is mediated by the extrinsic pathway through binding of the TRAIL ligand to death receptor 4 or 5 (DR4, DR5), activation of caspase-8, and requires sequential cleavage of both the carboxy (C)-terminal domain and amino (N)-terminal domain, or prodomain. Cells normally resistant to TRAIL have been shown to be sensitized by ubiquitous plant compounds called flavonoids via upregulation of DR4 and DR5. The small heat shock protein 27 (Hsp27) regulates apoptosis by associating with several members of the apoptotic cascade. We showed that Hsp27 associates with the prodomain of caspase-3, thereby inhibiting its activation. In addition, flavonoids have also been shown to modulate Hsp27 expression and phosphorylation. However, the exact molecular mechanisms responsible for the anti-apoptotic function of Hsp27 are not fully understood within TRAIL-resistant NSCLC. Recent research has focused on the ability of flavonoids to sensitize NSCLC to TRAIL treatment. Therefore, the goal of this study was twofold. First, we sought to elucidate the Hsp27 peptide responsible for binding to caspase-3 and inhibiting its activity. For this purpose, nested deletion clones of Hsp27 were generated and cloned into a mammalian expression vector containing a myc epitope-tag. These clones were used to define the Hsp27 subdomain able to regulate apoptosis and caspase-3 activity by immunoprecipitation, apoptosis assays, and caspase activity assays. Our results identified regions of Hsp27 responsible for its association with caspase-3 and additional regions responsible for the regulation of apoptosis. Second, we determined if combination treatments of the flavone apigenin and TRAIL would act synergistically to induce apoptosis in several NSCLC cell lines better than either treatment alone. Interestingly, the combination treatments resulted in increased cell death in a synergistic manner via the upregulation of the TRAIL receptor DR5, downregulation of anti-apoptotic proteins, and disrupting the DR5-Hsp70 complex. This research will lead to a better understanding of the molecular mechanisms of apoptosis as well as potential novel cancer therapies involving the use of natural plant compounds such as apigenin.