Enhancing Solubility, Stability, and Catalytic Properties of Human Paraoxonase-1 for Use as a Therapeutic Agent in Organophosphorus Poisoning 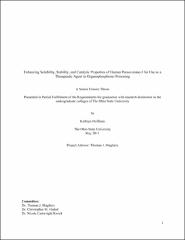 Organophosphorus compounds (OPs) are inhibitors of acetylcholinesterase. OPs are used in certain pesticides and are used in chemical warfare as nerve agents. Paraoxonase-1(PON1) is a serum hydrolase that naturally hydrolyzes OPs and could potentially be used as a therapeutic against OP poisoning. However, PON1 is not very soluble, stable, or active against OP substrates. PON1 has three cysteines, two of which form a disulfide in the folded form, which makes the protein more susceptible to misfolding with oxidation or disulfide scrambling. Many recombinant forms of PON1 (rePON1) have been made which enhance the solubility and expressibility of the enzyme (e.g. G3C9 and G2E6). In order to better understand the active site of the enzyme, a series of mutations near the active site were made in the G3C9 active site and tested for activity against paraoxon; phenylacetate; and a lab analog of G-nerve agents, CMP. Also, variants of the rePON1 have been engineered by Tawfik et al. that increase the catalytic efficiency of the enzyme (e.g. 4E9). In order to maintain the catalytic efficiency of 4E9 and simplify PON1 production, two different cysteine modified mutants were made to 4E9. These mutants were made by overlap PCR methods along with standard cloning techniques. In order to maintain the catalytic efficiency of 4E9 but also make the enzyme more human-like, a gene was designed that has the 4E9 active site and only the surface polar mutations of G2E6. All three variants were expressed and purified by Ni-NTA affinity column chromatography. The activities of the variants are tested against various OP substrates such as paraoxon and a lab analog of G- nerve agents, CMP. The results showed that the engineered variants proved to have similar activity to the parent, less drug-like molecules.