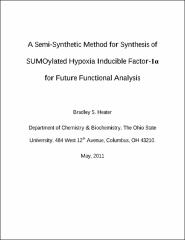 Abstract: Native chemical ligation (NCL) is a method used to synthesize a covalent bond between two proteins. The method has been extensively used to react a C-terminal thioester on one protein with an N-terminal cysteine residue on another protein. Our strategy deviates from this usual method by incorporating a cysteine containing analogue of pyrrolysine (PCA) into any site on a recombinant protein. My work uses NCL to conjugate Small Ubiquitin like Modifier (SUMO) to Hypoxia Inducible Factor -1α (HIF-1α) prelabeled with PCA. HIF-1α is a transcription factor that is known to generate a protective response during hypoxia, a common symptom of stroke in which there are depleted oxygen levels in tissues. Furthermore, during hypoxia, SUMO is conjugated to HIF-1α at Lys391 and Lys477. An in vitro preparation of SUMOylated HIF-1α is desired because of two challenges in isolating the protein from in vivo preparations; first, HIF-1α is rapidly degraded in normal respiring tissues and second, deconjugating enzymes cleave SUMO away once the function of the SUMOylated form is mediated in the cell. In order to generate the in vitro conjugated product we use the principles of intein chemistry to generate a thioester on SUMO. We incorporate PCA at previously predicted SUMOylation sites and set up a reaction with the SUMO derived thioester. We purified the conjugated products and this conjugated product will be utilized to create better anti-ischemia agents for patients with strokes or metabolic disorders that require high oxygen demands.

Our research is supported by a grant from the American Heart Association (10POST3900010) awarded to M.S.N