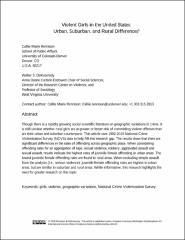 Though there is a rapidly growing social scientific literature on geographic variations in crime, it is still unclear whether rural girls are at greater or lesser risk of committing violent offenses than are their urban and suburban counterparts. This article uses 1992-2015 National Crime Victimization Survey (NCVS) data to help fill this research gap. The results show that there are significant differences in the rates of offending across geographic place. When considering offending rates for an aggregation of rape, sexual violence, robbery, aggravated assault and sexual assault, results indicate the highest rates of juvenile female offending in urban areas. The lowest juvenile female offending rates are found in rural areas. When excluding simple assault from the analysis (i.e., serious violence), juvenile female offending rates are highest in urban areas, but are similar in suburban and rural areas. While informative, this research highlights the need for greater research on this topic.