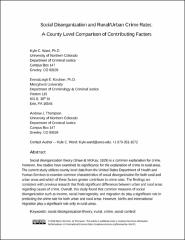 Social disorganization theory (Shaw & McKay, 1929) is a common explanation for crime. However, few studies have examined its significance for the explanation of crime in rural areas. The current study utilizes county level data from the United States Department of Health and Human Services to examine common characteristics of social disorganization for both rural and urban areas and which of these factors greater contribute to crime rates. The findings are consistent with previous research that finds significant differences between urban and rural areas regarding causes of crime. Overall, this study found that common measures of social disorganization such as income, racial heterogeneity, and migration do play a significant role in predicting the crime rate for both urban and rural areas. However, births and international migration play a significant role only in rural areas.