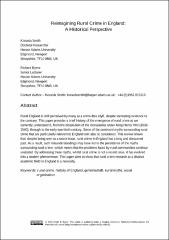 Rural England is still perceived by many as a crime-free idyll, despite increasing evidence to the contrary. This paper provides a brief history of the emergence of rural crime as we currently understand it, from the dissolution of the monasteries under King Henry VIII (1536-1540), through to the early twentieth century. Some of the persistent myths surrounding rural crime that are particularly relevant to England will also be considered. This review shows that, despite being seen as a recent issue, rural crime in England has a long and chequered past. As a result, such misunderstandings may have led to the persistence of the myths surrounding rural crime, which means that the problems faced by rural communities continue unabated. By addressing these myths, whilst rural crime is not a recent issue, it has evolved into a modern phenomenon. This paper aims to show that rural crime research as a distinct academic field in England is a necessity.