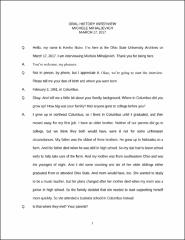 Michele Mihaljevich grew up in Columbus and never seriously considered attending any college other than The Ohio State University. She commuted from her parents’ home and majored in journalism. During her time at OSU, she worked on The Lantern in various roles, and was the Editor-in-Chief during the winter quarter of 1984. During her time in the newsroom, she helped cover big campus stories like student athletes being accused of sexual violence and football quarterback Art Schlichter's issues with gambling. After graduating, Mihaljevich first worked at a morning newspaper in Fort Wayne, then went on to do freelance work. She recalls her time at Ohio State and especially in The Lantern newsroom fondly, although she says she was disappointed by the merger of the School of Journalism with the Department of Communication.