Interview of A. Lovell Elliott by Mary Alice Casey and Kevlin Haire 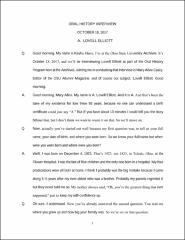 A. Lovell Elliott grew up in the small Ohio town of Waterville, and attended Ohio State because he had won a scholarship covering his first year of tuition. Elliot describes his experiences at OSU, including his study of Advertising, his membership in the Phi Delta Kappa fraternity, and living in Baker Hall with his brother, Winston. He also talks about his involvement with the Council on Student Affairs and the Sundial humor magazine. Early in his sophomore year, Elliott left OSU to have an emergency appendectomy, but he returned and completed his degree in 1946. After OSU, he worked in advertising until the early 1980s. At that time he decided to turn a hobby of autograph-collecting into a career as an autograph dealer. He now lives in Massachusetts with his wife, Joan, whom he met as a student at OSU.