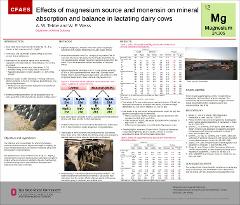 Clinical deficiencies of magnesium (Mg), unlike other macro-minerals, are not uncommon in U.S. dairy cows. This is partly because cows have small labile pools of Mg. Absorption of Mg can also differ depending on dietary potassium concentrations, solubility of Mg source and supplementing monensin, a common feed additive. We investigated the interaction of Mg source (MgO vs MgSO4) and monensin in diets subject to antagonism from high dietary potassium. Our hypothesis was a more soluble Mg source (i.e., MgSO4) with monensin would increase Mg absorption, and the effects would be additive. Eighteen Holstein cows were used in a split-plot, Latin square design. The whole plot was monensin (0 or 14 mg/kg) and subplot was Mg source. This design minimizes carryover effects from monensin, but allows cows to receive each Mg source. Periods were 21 d in length. Absorption and balance of minerals was measured via total collection of feces and urine on d 16 to 20, and used to calculate mineral balances. Calcium intake was similar for all treatments, but absorption and balance were greater for MgSO4. Intake of Mg was also similar, however, apparent absorption had an interaction. Without monensin, MgSO4 increased apparent absorption, whereas with monensin, MgSO4 decreased absorption. Feeding MgSO4 increased sulfur intake and absorption compared to MgO diets; of which, urinary sulfur excretion accounted for about 89% of the greater absorption. These results suggest MgSO4 or SO42- may benefit calcium homeostasis, and suggest monensin should be considered when evaluating source and supplementation rate of Mg.