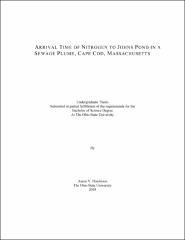 From 1936 to 1995, sewage was released through sand infiltration beds at Joint Base Cape Cod. The result was a contaminant plume within the groundwater that now extends over 8 km. Glacial processes that occurred during the end of the Pleistocene epoch deposited an unconsolidated, well-sorted coarse sand and gravel deposit that now acts as an unconfined aquifer and is the main source of drinking water in the region. One of the many concerns regarding this plume is the discharge of nitrogen containing species (i.e., nitrate and ammonium), and their potential effects on nearby Ashumet Pond and Johns Pond. Data from previous studies and the U.S. Geological Survey from 1999 were used to estimate qualitatively the time it would take for nitrate and ammonium in the groundwater to reach Johns Pond from an area immediately northwest of Ashumet Pond. It was found that nitrate has likely already infiltrated Johns Pond since 2016 at the latest, and that the flux of ammonium has just started arriving in Johns Pond and could persist for up to two decades.