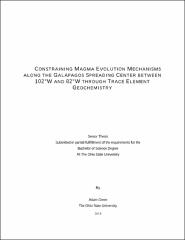 Past studies have been done on the Galápagos Spreading Center ridge to examine the effects of magma evolution with proximity to mantle plumes. However, these studies have not constrained the processes responsible for magma evolution along the entirety of the GSC ridge system. Using data from samples previously collected and analyzed for geochemical composition, the processes of magma evolution were constrained for the GSC. This study aimed to determine the different evolutionary processes of the GSC by focusing on trace element geochemistry. Trace element concentrations were chosen from their ability to provide insight to the natural processes driving the evolution of magmas erupted along mid-ocean ridges. Variations of trace element concentrations identified the extent of crust-magma interaction, determined bulk mantle compositions with respect to an average Normal Mid-Ocean Ridge Basalt (MORB), constrained regions of mantle plume influence on magmas, and identified discontinuous mantle source regions. Trace element spider diagrams reveal the Galápagos plume effects the GSC between 95.5°W & 86.5°W with the maximum degree of influence at 90.5°W. Trace element and major oxide behavior show fractional crystallization and crustal assimilation has occurred along the entire GSC. Plagioclase, olivine, and pyroxene play an important role in the fractional crystallization along the ridge. Magmas erupted at the GSC evolved from different mantle sources. The results from this study can further understanding of magma plumbing systems in areas with mantle plumes influencing magmas and ridges with transform fault offsets.