The Nineteenth Century Apostolic Christian Church: The Emergence, Establishment, and Fragmentation of a Neo-Anabaptist Sect 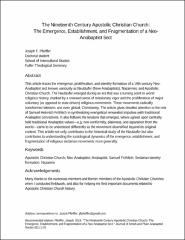 This article traces the emergence, proliferation, and identity formation of a 19th century Neo-Anabaptist sect known variously as Neutäufer (New Anabaptists), Nazarenes, and Apostolic Christian Church. The Neutäufer emerged during an era that was a turning point in world religious history, marked by a renewed sense of missionary vigor and the proliferation of major voluntary (as opposed to state-driven) religious movements. These movements radically transformed Western, and even global, Christianity. The article gives detailed attention to the role of Samuel Heinrich Fröhlich in synthesizing evangelical renewalist impulses with traditional Anabaptist convictions. It also follows the tensions that emerged, where agreed upon centrally held traditional Anabaptist values—e.g. non-conformity, plainness, and separation from the world—came to be understood differently as the movement diversified beyond its original context. This article not only contributes to the historical study of the Neutäufer but also contributes to understanding the sociological dynamics of the emergence, establishment, and fragmentation of religious sectarian movements more generally.