"Our Faith Is Good, but Strict": The Transformation of the Apostolic Christian Church-Nazarene in North America 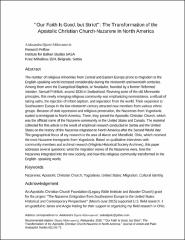 The number of religious minorities from Central and Eastern Europe prone to migration to the English-speaking world increased considerably during the nineteenth and twentieth centuries. Among them were the Evangelical Baptists, or Neutäufer, founded by a former Reformed minister, Samuel Fröhlich, around 1830 in Switzerland. Reviving some of the old Mennonite principles, this newly emerging religious community was emphasizing nonresistance, a refusal of taking oaths, the rejection of infant baptism, and separation from the world. Their expansion to Southeastern Europe in the late nineteenth century attracted new members from various ethnic groups. Because of state oppression and religious persecution, the Nazarenes from Yugoslavia started to immigrate to North America. There, they joined the Apostolic Christian Church, which was the official name of the Nazarene community in the United States and Canada. The material collected for this article is the result of empirical research conducted in Serbia and the United States on the history of the Nazarene migration to North America after the Second World War. The geographical focus of my research is the area of Akron and Mansfield, Ohio, which received the most Nazarene immigrants from Yugoslavia. Based on qualitative interviews with community members and archival research (Virginia Historical Society Archives), this paper addresses several questions: what the migration waves of the Nazarenes were, how the Nazarenes integrated into the new society, and how this religious community transformed in the English- speaking world.