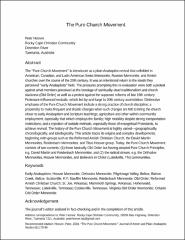 The "Pure Church Movement" is introduced as a plain Anabaptist revival that unfolded in American, Canadian, and Latin American Swiss Mennonite, Russian Mennonite, and Amish churches over the course of the 20th century. It was an intentional return to the ideals they perceived "early Anabaptists" held. The pressures prompting this re-evaluation were both a protest against what members perceived as the bondage of spiritually-dead traditionalism and church slackness (Old Order) as well as a protest against the supposed reforms of late 19th century Protestant-influenced revivals, which led by-and-large to 20th century assimilation. Distinctive emphases of the Pure Church Movement include a strong practice of church discipline; a propensity to make frequent and drastic changes when such changes are felt to bring the church closer to early Anabaptism and Scripture teachings; agriculture and other within-community employment, especially that which employs the family; high mobility despite strong transportation restrictions; and a rejection of outside methods, especially those of evangelical Protestants, to achieve revival. The history of the Pure Church Movement is highly varied—geographically, chronologically, and ideologically. This article traces its origins and complex developments, beginning with groups such as the Reformed Amish Christian Church, the David Martin Mennonites, Reidenbach Mennonites, and Titus Hoover group. Today, the Pure Church Movement consists of two currents: (1) those basically Old Order but having adopted Pure Church Principles, e.g. David Martin and Reidenbach Mennonites, and (2) the radical stream, e.g. the Orthodox Mennonites, Hoover Mennonites, and Believers in Christ (Lobelville, TN) communities.