The Temporal Realization of Morphological and Syntactic Boundaries 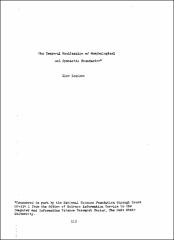 This paper is concerned with the effect of morphological and syntactic boundaries on the temporal structure of spoken utterances. Two speakers produced twenty tokens each of four sets of words consisting of a monosyllabic base form, disyllabic and trisyllabic words derived from the base by the addition of suffixes, and three short sentences in which the base form was followed by a syntactic boundary, this in turn followed by a stressed syllable, one unstressed syllable, and two unstressed syllables. The sentences thus reproduced the syllabic sequences of the derived words. The duration of words and segments was measured from oscillograms. The manifestation of morphological and syntactic boundaries is discussed, and some implications of the findings relative to the temporal programming of spoken utterances are considered.

Sponsored in part by the National Science Foundation through Grant GN-534.1 from the Office of Science Information Service to the Computer and Information Science Research Center, The Ohio State University.