The Crisis of Liberal Democracy 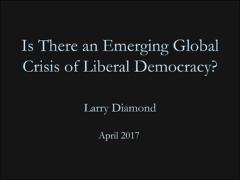 For the past decade, the world has been in a modest but persistent recession of freedom and democracy. As more democracies in recent years have slipped back onto an authoritarian path--including Turkey, Thailand, Bangladesh, and Nicaragua--analysts have debated whether we might be a risk of a "reverse wave" of democratic breakdowns. But with the rise of right-wing, nativist, populist movements and candidates in Europe and the United States, a bigger concern has emerged: That liberal democracy (and perhaps democracy altogether) may be threatened in the core of the democratic system. This lecture will review the trends in freedom and democracy over the last decade and then explain why liberal democracy is now in danger in the one place where it was presumed to be stable: The West.