Network Topology and the Democratic Peace 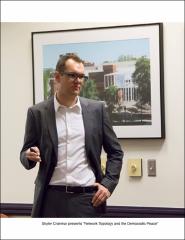 The democratic peace is one of the few empirical findings in International Relations that has acquired a law-like status. Many attempts have been made to fully understand the theoretical mechanisms at work, increasingly focusing less upon regime type alone, and more upon collinear explanations such as trade, economic openness, interests, and IGOs along with joint regime type. We take a network-based perspective on the democratic peace, holding that democracies are often on the same side of conflicts against autocratic states and because of this, do not fight one another. We find strong evidence of interdependence in the conflict network, that a state's decision to attack another is conditioned upon a third state with that same target. When accounting for this effect, evidence of the democratic peace is much less clear.