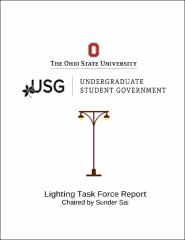 The USG Lighting Task Force used Lux Meters to measure light posts in the area of the University District known as the Core, one of the most populated off-campus living areas for OSU students. The area that was evaluated encompassed street segments east to west, from North High Street to 4th Street, and north to south, from Chittenden Avenue to Northwood Avenue. According to NOAA, the recommended luminance level is 5 lux for local sidewalks. We considered measurements below 5 lux to be low and this was the standard we used to evaluate lighting off-campus. Spring 2018 crime rates were analyzed and compared to lighting measurements by street to see if there was any correlation between lighting and crime. Finally, we compared streetlight-reporting procedures across the cities of Big Ten Schools. The results indicated that all streets had light posts with adequate lighting (5 lux or higher). However, the following streets had segments in-between light posts with poor lighting (below 5 lux): E. 12th, E. 13th, E. 14th, E. 15th, E. 16th, E. 18th, Woodruff, Frambes, Indianola, N. Pearl, E Lane, Norwich, Waldeck, and E. Northwood. There was a negative correlation between average light in-between posts and incidence of crime (r = -0.329), meaning that streets with lower average light in-between posts, had higher incidence of crime. Columbus is comparable to Big Ten cities in streetlight reporting procedures, but lacks a website specific to streetlight reporting, a video tutorial on how to report, and an effective follow up procedure. Our Recommendations include the following: 1. Establish more light posts along off-campus streets if financially feasible. 2. Reconsider the type of light bulb used: upgrade to Metal Halide bulb fixtures or LED bulbs, as they provide better color rendition and an even light distribution. 3. Reconsider the type of light post used: upgrade light posts to install more cobra head lighting instead of acorn light posts, as cobra head provides greater illumination 4. Create a website specific to streetlight reporting with a video tutorial on how to request for repairs. Additionally, improve follow up procedures after request is made.