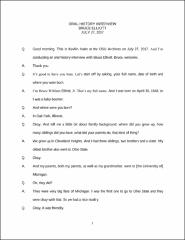 Bruce Elliott describes his time at OSU in the late 1960s through early 1970s. Elliott lived in Baker Hall for the entirety of the six years he attended OSU -- four years for his Bachelor’s degree, which he earned in 1970, and two additional years at Baker while he was working on his Master’s degree, which he received in 1972. Elliott discusses the various ways student life was different at that time on campus. He describes operating the Baker Hall switchboard, 18-year-olds being allowed to drink certain beer legally, and how the experiences of dorm living differed for men and women during that period. He also describes his recollections of the Spring 1970 student demonstrations and their aftermath on campus.