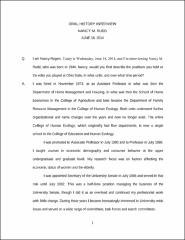 Nancy Rudd discusses her faculty and administrative roles at The Ohio State University. She was hired in November 1974, as an Assistant Professor in what was then the School of Home Economics in the College of Agriculture. She taught courses in economic demography and consumer behavior at the upper undergraduate and graduate levels. She also pursued research on factors affecting the economic status of women and the elderly. Rudd served as Secretary of the University Senate from 1986 to 1992, before being appointed Associate Provost in the Office of Academic Affairs, a position that was subsequently retitled numerous times in order to reflect a change and expansion of Rudd's responsibilities. In particular, Rudd emphasizes her work in the Office of Academic Affairs that included her involvement in a complete analysis and transformation of promotion and tenure policies and procedures, as well as her participation in the creation of an online Office of Academic Affairs Handbook of academic personnel policies and procedures.