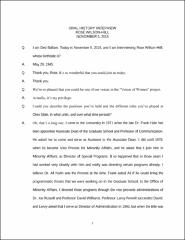 Rose Wilson-Hill discusses her career at Ohio State University, which began in 1971. She had been working for Frank Hale, then-President of Oakwood University. When OSU tapped him to be Associate Dean of the Graduate School and Professor of Communication, he asked her to come work for him in Columbus as his assistant. After Hale became the Vice Provost of Minority Affairs, Wilson-Hill joined him in that office as Director of Special Programs. She has worked in the Office of Minority Affairs, now the Office of Diversity and Inclusion, ever since, although in various positions. Wilson-Hill discusses efforts over time to enhance diversity and that changes are still needed. She also talks about the many positive experiences she has had in recruiting students to OSU and helping them achieve their goals while they are at the University.