Chinese Peripheral Diplomacy in East Asia: Can Beijing Learn from Its Unforced Errors? 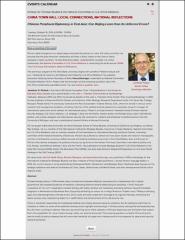 Chinese foreign policy in 2016 reveals sharp contradictions between Beijing’s aspirations for a heightened role in global governance and repeated evidence of maladroit, alienating behavior toward states along its periphery. China’s frequent invocations of “win win” cooperation contrast sharply with highly reactive and needlessly alienating behavior toward immediate neighbors in Northeast and Southeast Asia, frequently attributing its actions to a malign American “hidden hand.” Without reflecting upon and addressing these unforced errors, China could stimulate longer-term damage to its regional interests, reinforcing the desire among many neighboring states for a reaffirmation and enhancement of the US security role. China is not wholly responsible for heightened political and military tensions along its periphery. But its inability to learn from its mistakes or reflect on some of the potential consequences highlight shortcomings in Chinese policy making that the leadership has thus far been unwilling to address. However, by examining some of the setbacks in Chinese diplomacy and the factors that explain them, the possibilities for more creative foreign policy can also be discerned. The pressing question is whether China will prove able to rectify its policy missteps that will prove detrimental to its longer term interests and to the prospects for peace and security along its periphery.

Institute for Chinese Studies & the National Committee on U.S.-China Relations