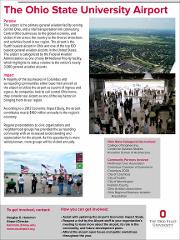 IMPACT. 1: A majority of the businesses in Columbus and surrounding communities either base their aircraft at the airport or utilize the airport as a point of ingress and egress. As companies look to call central Ohio home, they consider our airport as one of the key factors in bringing them to our region. -- 2. According to a 2012 Economic Impact Study, the airport contributes nearly $160 million annually to the region's economy. -- 3. Regular presentations to civic organizations and neighborhood groups has provided the surrounding community with an increased understanding and appreciation for the airport. As this opportunity is more widely known, more groups will be visited annually.
OSU PARTNERS: College of Engineering; Center for Aviation Studies; Knowlton School of Architecture
COMMUNITY PARTNERS: Northwest Civic Association; Columbus Chamber of Commerce; Columbus 2020; City of Columbus; City of Dublin; City of Worthington; Franklin County; Ohio Aviation Association; Ohio Regional Business Aviation Association
PRIMARY CONTACT: Douglas E. Hammon (hammon.3@osu.edu)