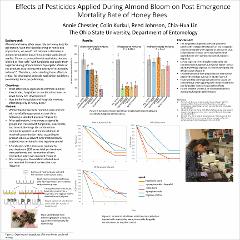 Effects of Pesticides Applied During Almond Bloom on Post Emergence Mortality Rate of Honey Bees: Almond crops rely on honey bees for pollination of their flowers. The primary objective of this study is to characterize the effect of insecticides and fungicides applied during almond bloom on developing honey bee larvae. Honey bee populations are decreasing at an alarming rate worldwide, with no obvious cause. Without honey bees, we would not only see a decrease in almond production but a hit to a major agricultural market. What is the cause of this increased mortality in honey bees? The experimental design consisted of 8 separate trials of bee larvae artificially reared on diets treated with three insecticides (chlorantraniliprole, diflubenzuron, and methoxyfenozide) in combination with fungicides commonly applied with these insecticides in a tank-mix (propiconazole, iprodione, boscalid, and pyraclostrobin). Bees were allowed to emerge naturally. After emergence, their mortality was tracked for several days and recorded. It was determined that four chemicals, either alone or in combination, had the greatest effect on mortality (less than or equal to 50% survival on day one). These chemicals are chlorantraniliprole, iprodione, propiconazole, and diflubenzuron. With this information, chemists can generate new formulas for pesticides and fungicides that are still effective but safe in combination.