The Semantics and Pragmatics of Right Dislocation: Odd thing, that. 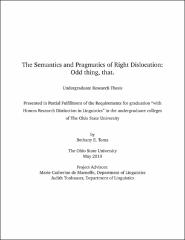 The sentence "She's a smart one, that Diana" is a so-called right dislocation construction: the noun phrase "that Diana" occurs at the right edge of the sentence and the sentence itself only realizes a pronoun ("she") to refer to Diana. This construction is particularly common among British English speakers. Whereas prior research has focused on the structure and interpretation of the construction, my research explores the hypothesis that speakers use the construction when they expect their interlocutors to agree with them about the propositional content of the utterance (e.g., that Diana is a smart person, in the aforementioned example). In summer 2017 I ran an experiment with 38 native British English speakers, administering a survey in which each participant rated the acceptability of a target sentence in context on a 6-point Likert scale. Target sentences varied minimally between right dislocated and non-dislocated variants, and contexts were either such that the speaker would expect the listener to agree with the propositional content of the utterance, or such that the speaker would expect the listener to disagree. Each target sentence was judged within both contexts. While no significant difference was found between the agree and disagree contexts among the right dislocated target sentences as a whole, the variation in response patterns both between participants and between items reveal potential routes for further exploration of right dislocation constructions' social meaning in the future.