Breaking Out of the Historical Private Sphere: Women's Involvement in the American Revolution 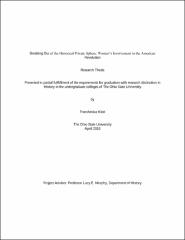 Women in early America were going beyond their private spheres of homemaking, farming, cooking and things of the like--they were stepping into the public sphere, historically where men were, and immersing themselves in the political spectrum during the years of the American Revolution. Women boycotted, fought in battles, were spies, and even corresponded with George Washington during this time to prove not only were there Sons of Liberty, but Daughters of Liberty as well.