Second-World Competition in Vietnam: Analyzing the Implications of the Vietnam War on Sino-Soviet Relations 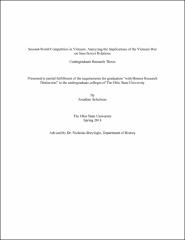 This project examines how the Soviet Union and China competed for global influence during and after the Vietnam War, despite both backing communist North Vietnam. This thesis examines the Vietnam War's effects on the ideological split in Sino-Soviet relations both during and after the Vietnam war, from the polemical attacks between the two to the creation of Interkit, a Soviet-established multinational organization created to constrain China's international influence, and the Sino-Soviet border battle on the Ussuri River. Through an analysis of Sino-Soviet competition in Vietnam, this project will examine how the three "superpowers" -- the United States, the Soviet Union, and China – intersected in Vietnam, transforming Sino-Soviet relations. This research predominantly draws upon primary-source documents, including meeting notes, memorandums, and international communications, from a variety of historical and national security archives. This project argues that China sought to use the Vietnam War to turn their militantly anti-imperialist agenda from rhetoric to action, which conflicted with the Soviet Union’s less aggressive stance of "peaceful coexistence." These competing viewpoints, from the countries the North Vietnamese internally referred to as their "two big brothers," played not only an important role in North Vietnam's military strategy in the early 1960s, but also in the Soviet Union and China's policies and attitudes towards one other.