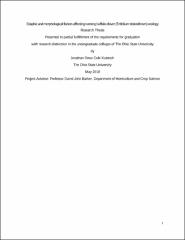 Running buffalo clover, Trifolium stoloniferum Muhl. ex A.A. Eaton, (RBC) is an endangered North American true clover that has been a conservation enigma since its rediscovery in the early 1980s. Physiological and agronomic measures of the species haven’t been a component of most research programs attempted in the past thirty-plus years. My objective was to investigate edaphic and morphological factors affecting RBC ecology. I made it a sub-objective to use agronomy to address shortcomings in current ecological strategies. In many agro ecological contexts, similar Eurasian clovers can be propagated from several points in a life cycle; given this knowledge, similar propagation and plant evaluation should succeed for a North American Trifolium. I studied the effects of pH on RBC growth, where in two experiments I examined RBC shoot and root growth (Chapter 2). In the first experiment, I studied growth under acidic and sulfurous regimes, where I found that RBC could persist in adverse conditions, but that white clover (T. repens) was a better competitor. I examined the vegetative and reproductive growth of several RBC accessions in a greenhouse common environment where I found that plant material can be very similar within a population, but accessions varied in their ability to produce different forms of growth (Chapter 3). In a greenhouse intervention and transplantation study I found that RBC can be propagated in the greenhouse from stolon tips (Chapter 4). These tips can yield up to 20 (average = 10) cloned plants for field plantings. Small transplants without a starter fertilizer planted in the fall appeared to be the most efficient transplants at this point in the process. Overall RBC is a true clover with limited phenotypic plasticity. The species can modify habitat to suit its pH preferences. Regional accessions behave similarly to one another, and within accessions, some phenotypic plasticity exists, though not as much as previously hypothesized. RBC responds well to intervention strategies, and managing habitats according to phenotypes and addressing some pH conditions might improve success in the field.