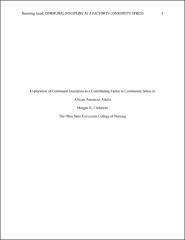 Discipline of children varies, and is multifactorial in its intent and impact. Exposure to discipline begins in childhood and continues through adolescence and adulthood. Physical or verbal discipline may come from parents and family, the community, or society. A lack of discipline, as well as parental permissiveness, positively predicts developmental changes and deviant behaviors in children (Harris et al., 2017). Community stressors may include abuse, neglect, and exposure to violence or prolonged economic hardship that results in protracted biological and psychological alterations in individuals. These alterations may have negative consequences for overall health, well-being, and positive life course progression. Exposure to violence in communities can desensitize children and they can begin to deny violent acts if parents do not aim to mitigate them (Tyler, 2013). The purpose of this study was to ascertain the perceptions of African American adults regarding stress and traumatic events occurring in their environment. A phenomenological approach was used to gather information on African American participants' interpretations of their lived experiences regarding stress and traumatic events within their lives. Participants aged 18- 70 years were recruited from a near eastside community in Columbus, Ohio. A community leader and business owner in the community hosted space for the groups. Three focus groups were conducted and led by an advanced practice mental health nurse and two senior nursing students assisted. The focus groups were audiotaped, transcribed, and analyzed for emerging themes. Themes identified included community change, children and parents, and protective isolation. Participants expressed concern for decline in the community and the community's services. Focus group members also expressed concern for the safety of the children in the community, as well as the concern for lack of positive authority figures for the children. Lastly, participants also expressed multiple forms of protective isolation as a coping mechanism for the dangers in the community. The interconnectedness of the identified themes emerged as the community's fear for the children's safety and discipline, but also as fear of the children and the violence they bring to the community when there is frequent exposure to violence and little discipline, parental control, or role models present. Results from this phenomenological study support findings in the literature regarding a lack of discipline in children can lead to poor overall health of the community residents. Additional studies need to be conducted within similar communities.