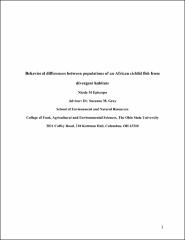 With all of the different environmental shifts occurring in ecosystems across the globe due to anthropogenic activities, it is not hard to imagine that in order for a species to survive, it needs to adjust its phenotypic traits. In aquatic systems, a number of environmental changes are known to affect the survival of fish, including low dissolved oxygen (hypoxia) and increased suspended sediments (turbidity). Pseudocrenilabrus multicolor is a species of African cichlid fish that is widespread across East Africa and is found in a range of habitats that vary in dissolved oxygen (DO) and turbidity level. My study tested the hypothesis that there are persistent differences in reproductive behaviors across populations due to the environmental differences the fish experience in their natural habitats (swamp = low DO, clear; river = high DO, turbid). To test this, I made repeated observations of F1 fish from four populations (two swamp and two river populations) reared in the lab under common garden, low stress conditions (high dissolved oxygen, low turbidity). Each of 20 aquaria (5 per population), holding one male and two females, were observed for ten minutes (each week for five weeks) during which I recorded any behavior demonstrated by the fish. The behaviors were divided into two categories, reproductive behaviors and aggressive behaviors, and the mean ratio of reproductive to aggressive behaviors calculated per aquarium. Two separate one-way ANOVAs indicated that there were no behavioral differences among the four populations, or between two habitat types when populations were pooled. This could indicate that the effort placed into reproductive behaviors is flexible, and that there is a strong plastic component to the behavior.

Third Place at the Denman in the Water and Earth category