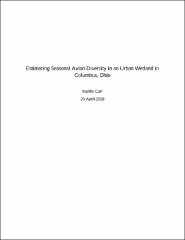 Biodiversity can be a useful measure of overall health of an ecosystem. Despite seasonal changes in avian communities, diversity is often measured only during the breeding season. Monitoring avian species over seasonal variations has the potential to expand our understanding of the ways in which habitats can be utilized by a variety of species. In a 52-acre urban wetland, avian species were captured using mist netting over a period of three years. This method allowed for sampling of secretive species that standard audio-visual surveys often fail to detect. Plumage characteristics were used in identifying species. We calculated diversity using Shannon's index and standardized effort using net hours to compare diversity among seasons. Using capture effort, we also estimated relative abundance of species and analyzed the effect of temperature on diversity. This study provides a measure of diversity for the site during under-sampled times of the year when communities tend to shift in composition.