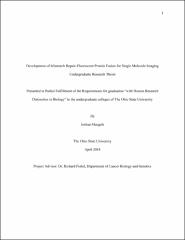 DNA mismatch repair (MMR) is an essential process for maintaining genome integrity. Defective MMR can lead to the hereditary cancer predisposition Lynch Syndrome, as well as 10-40% of related cancers1. MMR removes a mismatched DNA nucleotide and replaces it with the correct one2. This process involves the formation of a cascade of highly conserved MMR protein complexes on DNA3. These conserved proteins include the MutS and MutL proteins in Escherichia coli and their homologs in other organisms1. Knowing how the MutS and MutL homolog complexes interact with DNA and each other is crucial for understanding MMR. A powerful method for studying such interactions is single-molecule total internal reflection fluorescence (smTIRF) microscopy. To visualize MMR using smTIRF, individual proteins must be labeled with a fluorophore. Engineered fluorescent proteins that contain specific excitation and emission properties have been used in smTIRF. This project sought to establish useful fluorescent proteins to study MMR in vivo by identifying the far-red fluorescence spectrum of the fluorescent protein miRFP670 and constructing two fluorescent protein fusions: MutS-mTagBFP and MutS-mEos3.2. In preliminary studies, the emission spectrum of purified miRFP670 was obtained via spectrofluorimetry. The expression of MutS-mTagBFP was optimized and a purification protocol developed. MutS-mEos3.2, however, appeared to inhibit normal MutS function and was not pursued further.