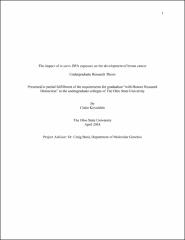 Previous studies have shown that in utero exposure to diethylstilbestrol (DES), a synthetic form of estrogen, increases the risk of developing various forms of cancer, including breast cancer, later in life. Bisphenol A (BPA) has been shown to act as a synthetic estrogen, and acts similarly to DES in rodents. Both compounds belong to a class of compounds known as endocrine disrupting compounds (EDCs), known to have hormonal activity. In utero BPA exposure can also increase the risk of developing breast cancer in rodents. The exact mechanism by which BPA alters the morphology of the mammary gland to create this susceptibility, however, is unknown. Using immunohistochemistry, we have shown that BPA affects the expression of two key proteins, Ki67 and ERα, in the stroma, correlating to significant defects in the epithelium. These data suggest that BPA induced alterations in the stroma may affect the epithelial phenotype, specifically ductal branching. One cell type of the stroma, fibroblasts, contribute to the production of the extracellular matrix (ECM), which provides structural support for the epithelial ducts. These cells also communicate with the developing epithelium through secreted proteins. Therefore, fibroblasts are critical to both the structure and function of the mammary gland. Alterations to fibroblasts have the potential to lead to changes that can disrupt normal development and cellular function in the mammary gland. We performed transcriptome analysis and identified the extracellular matrix to be significantly altered in the BPA exposed mammary glands, so collagendeposition was investigated. We demonstrate that BPA exposed fibroblasts have increased collagen in the mammary glands, a molecular phenotype shown to increase cancer risk.